Across the FLAT breadth of the Earth?

I have repeatedly stated in other blog posts and videos that “The Bible is a flat Earth book from Genesis to Revelation.” Well, this morning, I found another interesting proof of this in the book of Revelation as a result of watching a video by Pastor Dean Odle. He was studying Revelation 20 and found the following little nugget. After Satan is released from his thousand years in prison, he goes out to deceive the nations in the “four corners of the Earth.” The first thing we must note is that this can’t refer to the “four cardinal points on a compass” as many a Christian apologetic website will try to tell you this means. Why? Because there are no East and West corners, points or other definitive ends like there are to North and South on the globular Earth model. If you use the cardinal points argument, you only have two legitimate “points” not four. If you use the “quarters” argument, again, there are no East and West quarters, since there is no place we can definitively point to and say, “That’s the East and that’s the West,” like we can with North and South. So, that argument is quite lame in my opinion. Plus, if you assign a point to East and West, then you have a big problem with verses like this:

The whole point of this verse is that at no time do you ever arrive at East and/or West. They are so far removed from one another that there is no way to measure the distance. If you go East, you never arrive at West like you do when you go North (on a globe) and eventually end up going South. So, you simply cannot apply the “four corners/quarters” of the Earth to anything to do with the cardinal points on a compass.

Whereas, if, as I’ve pointed out in one of my previous blogs, the “circle of the Earth” was “inscribed” into something else, then that something else likely has four corners. So, what you effectively end up with is a circle inscribed into a square. But that’s not the point of this post. Rather, it’s the next verse in Revelation 20 that caught my attention:

Revelation 20:9 And they went up on the breadth of the earth, and compassed the camp of the saints about, and the beloved city: and fire came down from God out of heaven, and devoured them.

The word for “breadth” is platos: 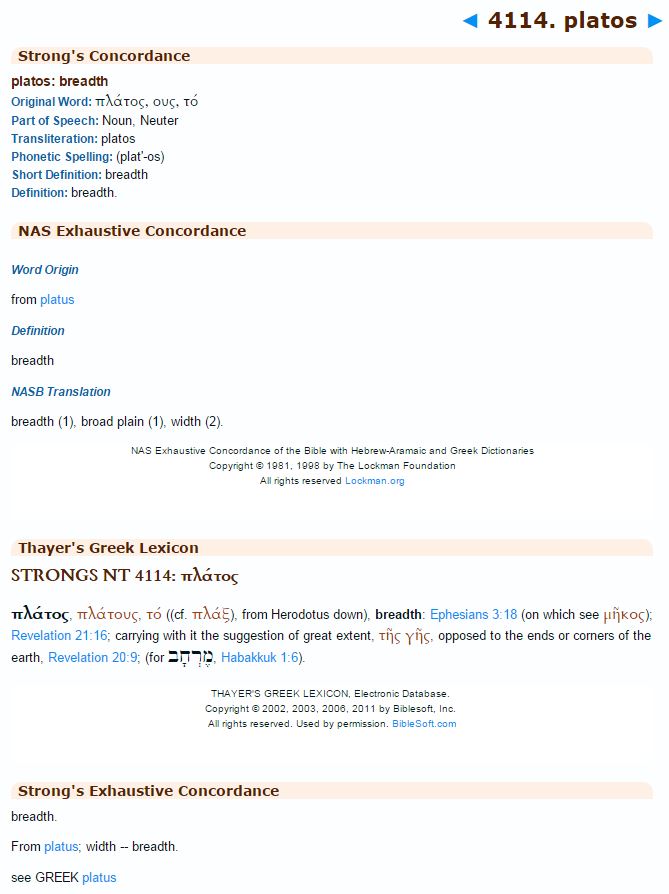 As it says above, it means “width” or “breadth.” This in and of itself doesn’t necessarily support only a flat Earth model. However, when you look at the words from which this word is derived, we start to gain a clearer picture. Note that Strong’s says it comes from the word “platus” which means “broad”: 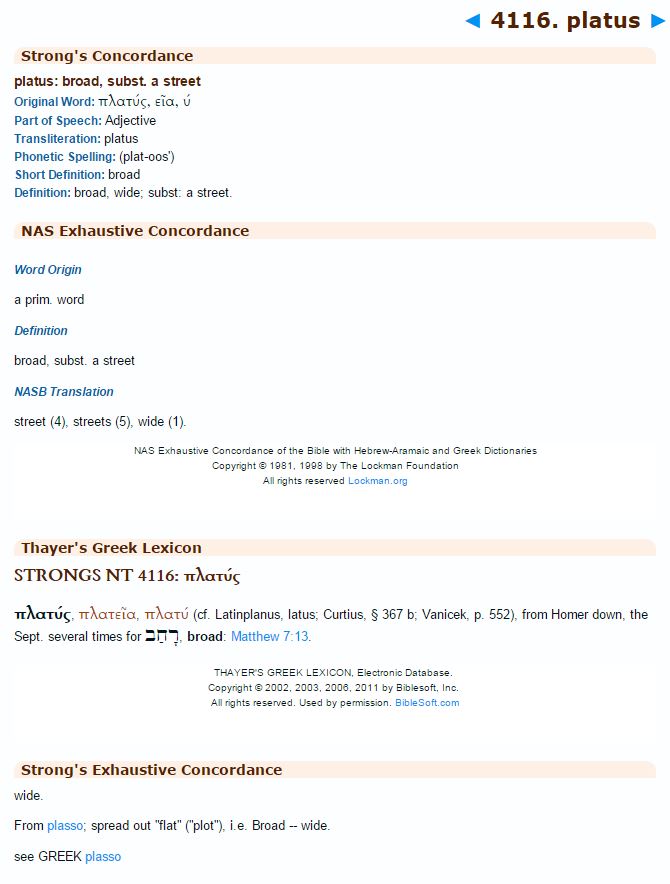 So, here we have something that is broad/wide. But as we also see above, “platus” comes from “plasso” which means FLAT! But not only is it flat, it is likened unto something that has been molded from clay: 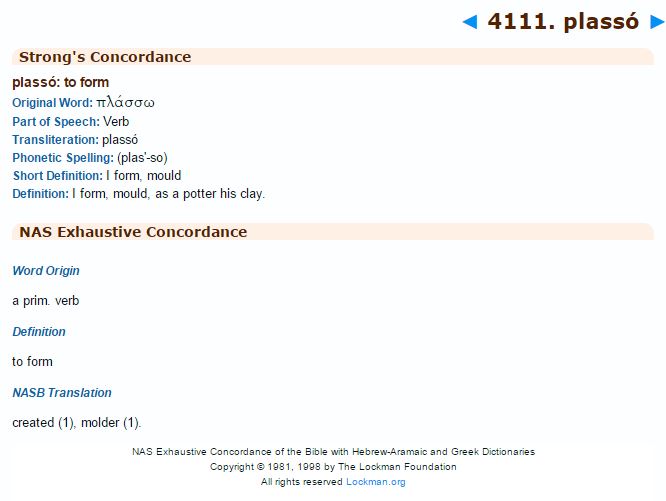 Job 38:
4 Where wast thou when I laid the foundations of the earth? declare, if thou hast understanding.
5 Who hath laid the measures thereof, if thou knowest? or who hath stretched the line upon it?
6 Whereupon are the foundations thereof fastened? or who laid the corner stone thereof;
7 When the morning stars sang together, and all the sons of God shouted for joy?
8 Or who shut up the sea with doors, when it brake forth, as if it had issued out of the womb?
9 When I made the cloud the garment thereof, and thick darkness a swaddlingband for it,
10 And brake up for it my decreed place, and set bars and doors,
11 And said, Hitherto shalt thou come, but no further: and here shall thy proud waves be stayed?
12 Hast thou commanded the morning since thy days; and caused the dayspring to know his place;
13 That it might take hold of the ends of the earth, that the wicked might be shaken out of it?
14 It is turned as clay to the seal; and they stand as a garment.

Oddly enough, KJV Only fanatic Mike Hoggard uses this same passage from Job to try and refute the flat Earth model, by INCORRECTLY stating that “clouds are a swaddlingband” for the Earth. First, he misquotes this text. The clouds are resting on the Earth as a garment, whereas it is the “thick darkness” that is tightly surrounding the Earth like swaddling bands. Nothing about this is in contradiction to the flat Earth model, which has the firmament (and the Earth within it) surrounded by the thick darkness of the waters above, below and all around it. Second, he dismisses the language of the preceding verses, which describe the foundation of the Earth being laid (which implies being set ON something). The text then goes on to describe stretching a line UPON the Earth, not all around it. Job also goes on to describe a boundary for the “proud waves” to be stayed and go no further (a statement, which perfectly fits the FE model with its two to three hundred foot outer ice ring). Mike – and plenty of others like him – conveniently ignore all of this, along with the statement of taking “hold of the ends of the earth” so that the “wicked might be shaken out of it.” Where are the ends of the globe that one can take hold of and shake it? And if all of the above weren’t enough, it is the last verse that ties Job with Revelation, wherein it describes the Earth as being pressed FLAT as clay is to the seal. 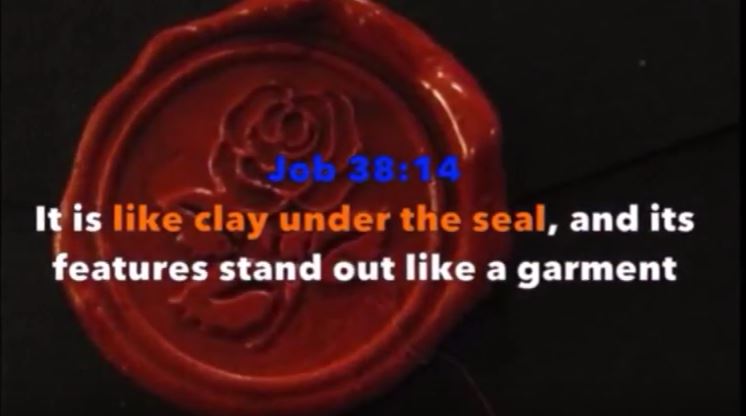 Once again, I have to say, like it or not, believe it or not, accept it or not, the proof that your Bible is a flat Earth book from Job/Genesis to Revelation is undeniable.