How do you “fill” the surface of a ball?

So, I was just thinking about something when I first woke up today…

Genesis 1:22 And God blessed them, saying, Be fruitful, and multiply, and fill the waters in the seas, and let fowl multiply in the earth.

The word used for “fill” the waters here is Strong’s # 4390 מָלֵא (maw-lay’): to fill. The precedence for understanding this word is thus established with the first usage of the word, where it talks about filling the water of the seas with fish. From this, we clearly see something (in this case, the seas) being filled, as in a container.
Note also that the birds are to multiply “in the earth.” Wait. I thought birds flew “in the sky.” Is this a typo? No. The KJV gets this right, because in the Hebrew text, it reads: בָּאָֽרֶץ׃ and when the “בָּ” (bet) precedes the word it means “in”.

Perhaps not coincidentally, the very first word we are introduced to in the Scriptures is this preposition: “In the beginning” – בְּרֵאשִׁ֖ית. It’s also quite interesting that it shows up in the description of where the sun, moon and stars were placed.

That’s right, they were placed “in the firmament” (בִּרְקִ֣יעַ) not outside and all around it as many a Creation scientist would have you believe.

We see another strange incident where the phrase “in the earth” appears in the story regarding Cain’s judgement:

Genesis 4:12 When thou tillest the ground, it shall not henceforth yield unto thee her strength; a fugitive and a vagabond shalt thou be in the earth.

Many other English translations change the word from “in” to “on” or “upon.” But those translations are not being true to the text. Once again the word translated into “in the earth” is the word for “earth” preceded by a letter bet (בָאָֽרֶץ׃) serving as the preposition for “in.” There is another preposition for “on/upon” and that word is: “עַל־.” It first appears in the second verse of the Bible:

The language is very specific. So, what are we to make of this? Birds flying in the earth? Cain being a fugitive in the earth? While some take the position that Cain became a troglodyte (cave dweller, or someone who literally went inside the earth), I am going to propose that the same thing is being represented for both the birds and for Cain. In both cases, we are seeing the concept of an enclosed world system, which as a whole is known as “the earth” and it includes all that is there inside of the “firmament,” which separated the waters above from the waters below in Genesis 1:6-8: 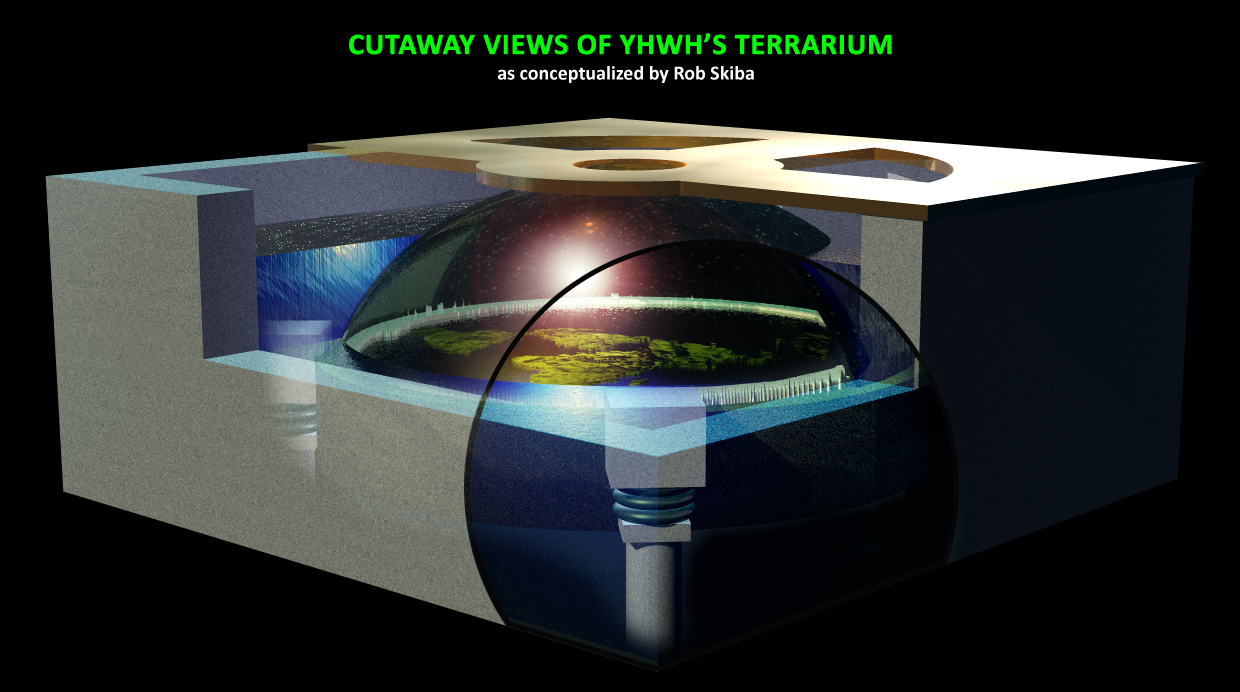 Thus Cain is in the earth the same way the birds are in the earth. They are in a firmament enclosed system.
Continuing with the notion of “filling,” the same word [Strong’s # 4390 מָלֵא (maw-lay’): to fill] is used in the following verses:

This idea of filling a container certainly works within the framework of the Hebrew cosmological worldview:

Not quite sure how you can squeeze any of this into the notion of “filling” the surface of a ball though. Therefore, I suggest this is further proof of the fact that the Holy Spirit inspired Hebrew authors of Scripture subscribed to the cosmology depicted above by the scholars of Logos Bible Software.
– Rob Skiba