John 12:1 Then Jesus six days before the Passover came to Bethany, where Lazarus was, which had been dead, whom he raised from the dead.

We know that Yeshua died on Passover, so when exactly is the day He was hailed as king with palms?

John 12:
12 On THE NEXT DAY much people that were come to the feast, when they heard that Jesus was coming to Jerusalem,
13 Took branches of palm trees, and went forth to meet him, and cried, Hosanna: Blessed is the King of Israel that cometh in the name of the Lord.

So the day of palms was five days before Passover. Today, many think Yeshua died on a Friday, rose on Sunday and that today is therefor “Palm Sunday.” There are a number of problems with that theory. First of all, He did not die on a Friday. How do we know this? He said in Matt. 12:38-40 that He would be dead 3 days and 3 nights (which is 72 hours). 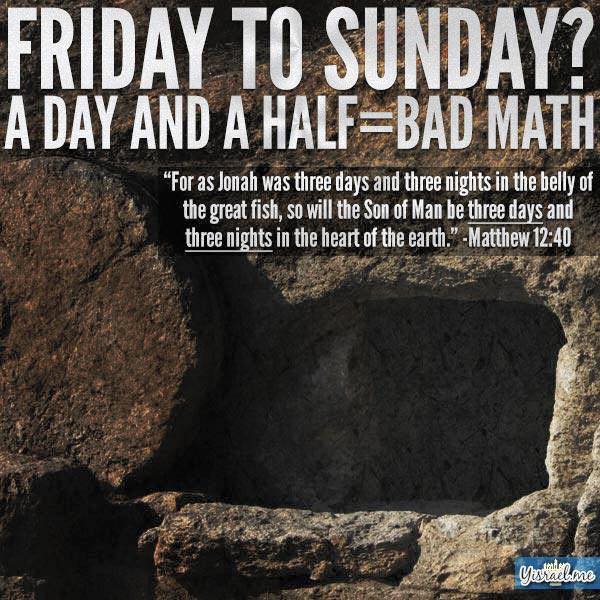 There is no way you can get 3 days and 3 nights from Friday to Sunday. It is far more likely that He died on a Wednesday, prior to the “High Sabbath” that is Unleavened Bread (the day after Passover). This is the “Sabbath” that most Christians don’t understand because they don’t know much about the “moedim” (appointed times) of YHWH described in Leviticus 23 and throughout the Old Testament. They tend to only know about the weekly Sabbath and therefor assign the Sabbath that was approaching soon after Yeshua’s death to that of Saturday – hence the whole “Good Friday” issue. But here is a good diagram, which I believe accurately describes the timing of our Messiah’s Passion: 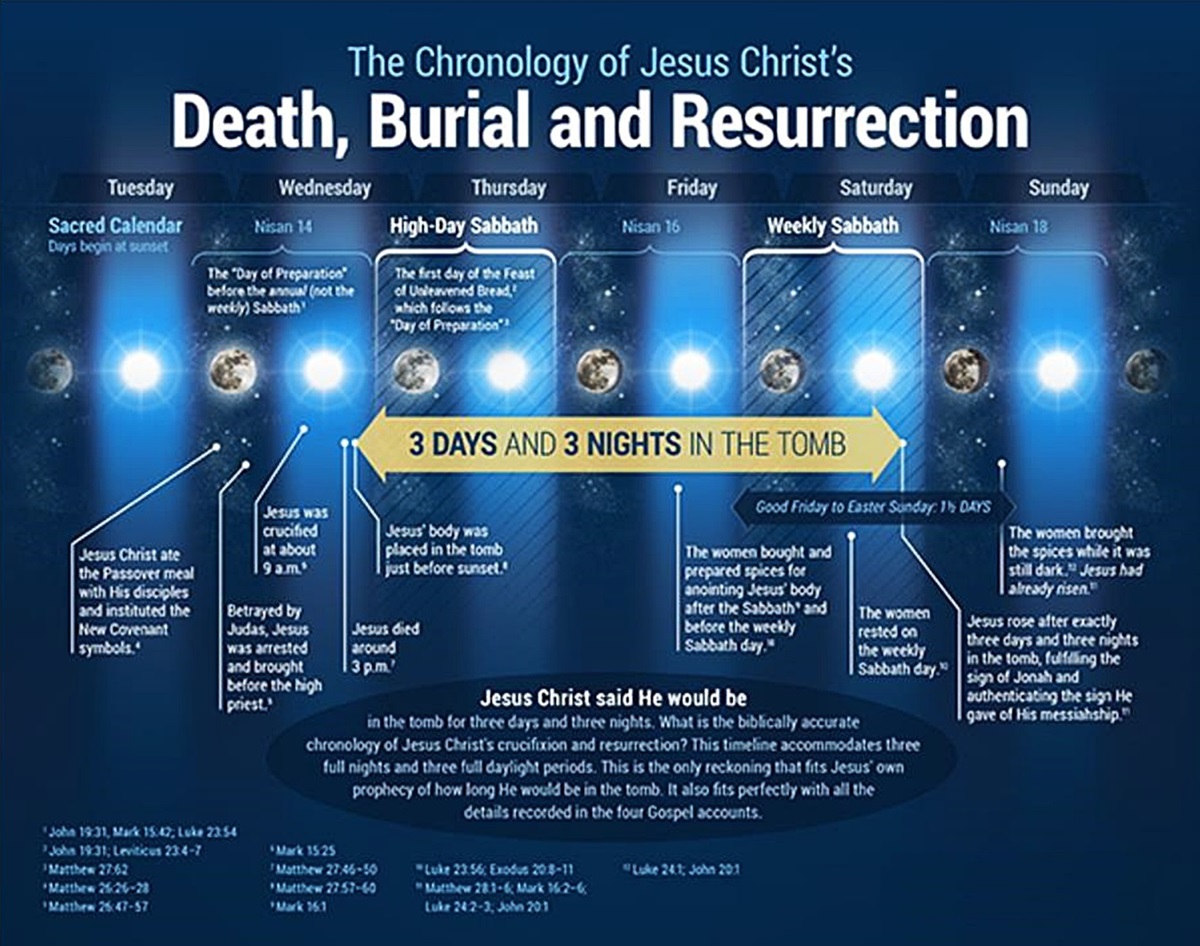 Since this is most likely the case, then the day the Jews hailed Him as king with palms would have been “Palm Friday” the week before. This is yet another example of why I constantly say there is soooooo much we get wrong when we substitute the truth of Scripture, with the traditions of men. For instance, even a straight reading of the Resurrection reveals He didn’t rise on Sunday either:

Matthew 28:
1 In the end of the Sabbath, as it began to dawn toward the first day of the week, came Mary Magdalene and the other Mary to see the sepulchre.
2 And, behold, there was a great earthquake: for the angel of the Lord descended from heaven, and came and rolled back the stone from the door, and sat upon it.
3 His countenance was like lightning, and his raiment white as snow:
4 And for fear of him the keepers did shake, and became as dead men.
5 And the angel answered and said unto the women, Fear not ye: for I know that ye seek Jesus, which was crucified.
6 He is not here: for he is risen, as he said. Come, see the place where the Lord lay.

Note that the two Marys came at the end of the Sabbath (Saturday) as it began to dawn toward not “the first day of the week” but rather, the first of the Sabbaths (mia ton sabbaton) leading to Pentecost, which are the only Sabbaths that are counted. If this is the first you have heard of this, please read my Facebook note to learn more: https://www.facebook.com/notes/rob-skiba/first-day-of-the-week-or-first-of-the-sabbaths/10152758658782506 You may also wish to see this:

When they got to the tomb, an angel showed up and opened it revealing that it was already empty. They were there on Sunday (which more than likely was just after sunset on Saturday) and He was already gone. If He died on Wednesday at 3pm, 72 hours later would be 3pm Saturday, just a few hours before sunset. Even assuming His prophecy in Matt. 12 is a reference to His burial, note that He was buried before sunset, most likely sometime before about 6:30pm on Wednesday. Thus, 72 hours later would have Him rising on the third day before sunset, which means He rose on Saturday, not Sunday as most have taught and believed.

Indeed, my research has led me to believe that Yeshua died on a Wednesday Passover, was buried just before the High Sabbath of and during the first few days of Unleavened Bread, rose from the dead by the end of the weekly Sabbath and then rose to His Father (John 20:17) to present His First Fruits Offering, all perfectly on cue. None of what Yeshua did coincided with any 40 days of Lent (which traces back to the “weeping for Tammuz” ritual), nor “Palm Sunday,” “Good Friday” and certainly not Easter.

Additionally, regarding Easter, what I find most ironic is how the KJV only crowd will defend the KJV’s solo use of “Easter” in Acts 12:4 by justifying it as being totally pagan, and Herod being pagan waiting for the fertility goddess “holiday” to finish. Their reasoning generally goes something like this:

The many opponents to the concept of having a perfect Bible have made much of this translation of “pascha”.

Coming to the word “Easter” in God’s Authorized Bible, they seize upon it imagining that they have found proof that the Bible is not perfect. Fortunately for lovers of the word of God, they are wrong. Easter, as we know it, comes from the ancient pagan festival of Astarte. Also known as Ishtar (pronounced “Easter”). This festival has always been held late in the month of April. It was, in its original form, a celebration of the earth “regenerating” itself after the winter season. The festival involved a celebration of reproduction. For this reason the common symbols of Easter festivities were the rabbit (the same symbol as “Playboy” magazine), and the egg. Both are known for their reproductive abilities. At the center of attention was Astarte, the female deity. She is known in the Bible as the “queen of heaven” (Jeremiah 7:18; 44:17-25). She is the mother of Tammuz (Ezekiel 8:14) who was also her husband! These perverted rituals would take place at sunrise on Easter morning (Ezekiel 8:13-16). From the references in Jeremiah and Ezekiel, we can see that the true Easter has never had any association with Jesus Christ.

It is elementary to see that Herod, in Acts 12, had arrested Peter during the days of unleavened bread, after the Passover. The days of Unleavened Bread would end on the 21st of April. Shortly after that would come Herod’s celebration of pagan Easter. Herod had not killed Peter during the days of Unleavened Bread simply because he wanted to wait until Easter. Since it is plain that both the Jews (Matthew 26:17- 47) and the Romans (Matthew 14:6-11) would kill during a religious celebration, Herod’s opinion seemed that he was not going to let the Jews “have all the fun “. He would wait until his own pagan festival and see to it that Peter died in the excitement.

Thus we see that it was God’s providence which had the Spirit-filled translators of our Bible (King James) to CORRECTLY translate “pascha” as “Easter”. It most certainly did not refer to the Jewish Passover. In fact, to change it to “Passover” would confuse the reader and make the truth of the situation unclear.

There is a lot more to their reasoning and the rest of the above can be read here for example: https://www.chick.com/reading/books/158/158_02.asp There is certainly plenty I could say to refute their arguments, but what I find most ironic and would prefer to address here is the fact that these same people (KJV only types) who will so vehemently defend the translation of “pascha” in the KJV as “Easter,” referring to it as Herod’s pagan festival, will then turn right around and continue to celebrate and defend that very same totally pagan celebration themselves! In fact, I went with my parents to a good old-fashioned Baptist church this morning. The pastor started his message by actually acknowledging that Easter is pagan and he then explained all about it. So, it was quite clear that he knew the truth. But then, just as far too many pastors do with X-mess, he went on to justify why “we” celebrate this day. We’ve “Christianized” it, preferring nowadays to refer to it not as Easter, but rather as “Resurrection Sunday” to get around the issues. Convenient. But as we’ve already seen, it is not likely that He even rose on Sunday.

Remember, Yeshua said (several times) that He would be raised on “the third day.”

Matthew 16:21 From that time forth began Jesus to shew unto his disciples, how that he must go unto Jerusalem, and suffer many things of the elders and chief priests and scribes, and be killed, and be raised again the third day.

Matthew 17:23 And they shall kill him, and the third day he shall be raised again. And they were exceeding sorry.

Matthew 20:19 And shall deliver him to the Gentiles to mock, and to scourge, and to crucify him: and the third day he shall rise again.

Again, you simply can’t get a third day (72 full hours) between late Friday and early Sunday morning (a.k.a. the typical “sunrise service”). Whereas, if you actually understand the truth of YHWH’s Word, beginning with “the Beginning” (Genesis), you will see that our Jewish, Torah-keeping Messiah was hitting His mark in YHWH’s Divine Script through every step of His ministry. 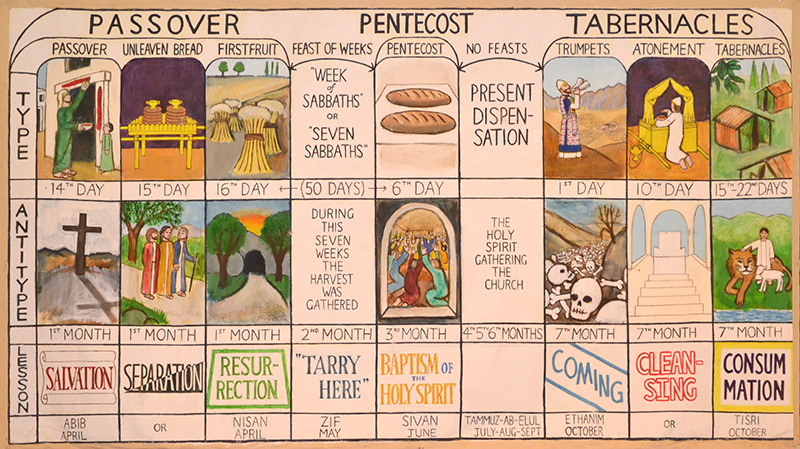 If we can’t get this right in our understanding of His first coming, we’ll never understand the timing and nature of His second. We need to STOP “Christianizing paganism” and start getting back on YHWH’s page, doing “Bible things in Bible ways” if we truly want to worship our Savior “in spirit and in truth.”