I’m feeling the need for a bit of a rant coming on…
Right now Christians are hailing Trump as a Cyrusian messiah. Of course, if he’s a Cyrus, then he’s from Persia and Babylon. Convenient. Care to guess how long it will take until these same people start putting out “prophetic words” that he’s the Antichrist of End Times Babylon? I’d wager it will take less than 4 years. LOL!
SMH Doubt it? Consider what the Wikipedia entry has to say of Cyrus… 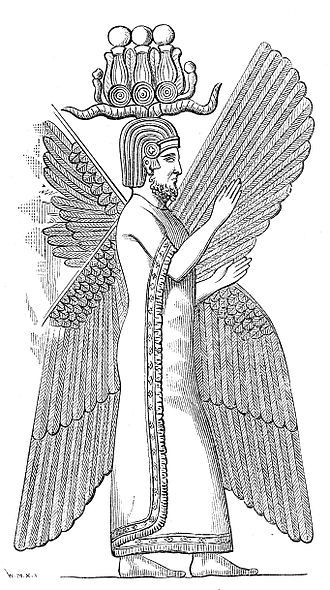 Cyrus built his empire by conquering first the Median Empire, then the Lydian Empire and eventually the Neo-Babylonian Empire. Either before or after Babylon, he led an expedition into central Asia, which resulted in major campaigns that were described as having brought “into subjection every nation without exception”.[9] Cyrus did not venture into Egypt, as he himself died in battle, fighting the Massagetaealong the Syr Darya in December 530 BC.[10][11] He was succeeded by his son, Cambyses II, who managed to add to the empire by conquering Egypt, Nubia, and Cyrenaica during his short rule.

Cyrus the Great respected the customs and religions of the lands he conquered.[12] This became a very successful model for centralized administration and establishing a government working to the advantage and profit of its subjects.[7] In fact, the administration of the empire through satraps and the vital principle of forming a government at Pasargadae were the works of Cyrus.[13] What is sometimes referred to as the Edict of Restoration (actually two edicts) described in the Bible as being made by Cyrus the Great left a lasting legacy on the Jewish religion, where, because of his policies in Babylonia, he is referred to by the Jewish Bible as Messiah (lit. “His anointed one”) (Isaiah 45:1),[14] and is the only non-Jew to be called so:[15] “So said the Lord to His anointed one, to Cyrus”.Isaiah 45:1-7

And don’t even get me started on the question of modern “Israel.”  [ http://www.quest4truth.net/Archived-Shows/quest4truth-episode-11 ] Suffice it to say, the only “support” the (true) Israel of Scripture ever needed can be found in Leviticus 26:1-13  – and NOT in a fraudulent (s)election system of a foreign nation run by Luciferians. Just sayin,’

But back to the question: Is Trump our Cyrus? Personally, I think not. If you do, I suppose we’ll see how well that works out in time. At any rate, I guess he’s better than a confirmed lying, murderous, traitor of a Luciferian witch… which was our only other alternative. Or so we can only hope. 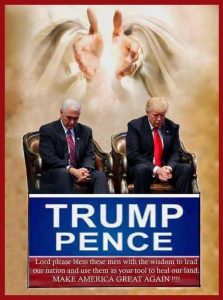 Anyway… with a running mate like “Pence,” care to make a bet on how long it will take for all the Pre-Trib “prophecy” gurus to start linking Trump to the “last trump” of Scripture? I mean come on! Trump – Pence. Right? I have to think this was rigged to be that way just to get Christians all riled up. “They” have to be laughing their butts off at us right about now. But we’ll not disappoint them. We’ll play right into their game (as usual). So start watching for all the books and videos to start coming out – especially by next summer, just in time for Sept. 11, 2017 (around the Feast of Trumpets time frame and the alleged near repeat stellar alignment of Rev. 12:1-5). And then of course even more so by May 14, 2018. Because after all, we’ll be celebrating the 70th anniversary of the alleged “founding of the nation of Israel” (refer to Psalm 90:10). Oh yeah… and being that this is allegedly the tail end of a “Shmitah” year, and it’s supposedly the year 5777 on the Jewish calendar and I’ve already had someone claim on my Facebook page that Trump will be 70 years – wait for it – 7 months and 7 days old when he’s sworn in on inauguration day – the next few years should be quite interesting – if not exceptionally annoying.

Right now, Trump’s the Cyrusian Messiah. Tomorrow he’ll be the Antichrist. But wait! I thought Obama was the Antichrist!!! I mean, didn’t all the “Torah codes” (which also predicted Hillary as president) say so? Haven’t there been a few BILLION blogs and videos “proving” that Obama is the cloned Pharaoh who IS the Antichrist? Oh but… Trump isn’t in office yet, so there’s still time to declare Martial Law and keep O in office indefinitely. {sigh} I get it. I guess we’ll have a few more months to wait and see if that scenario plays out. And of course all of this implies that America is Babylon and that the whole Bible is really about us – as everything else is – anyway, right? Oh, but maybe O will leave the White House and become the head of the U.N. and all those other “prophecies” can run parallel with all the new ones that are sure to come out in the days ahead.

Sorry folks. The Bible is NOT about the good ol’ U.S. of A. And our president is NOT going to be the Antichrist. Read your Bible! The Antichrist Beast comes from the Bottomless Pit (Rev. 9:11 and 17) not the freaking White House, Kenya or New York!

This means that neither Obama nor Trump are candidates for the role of THE Antichrist. This of course does not mean they can’t be forerunners to prepare the way.

Guys, he’s just another SELECTED puppet. Nothing more. And he’s not going to be the answer to all our problems. That said, admittedly, he’s probably a million times better than Hitlery, but he’s not our nation’s new messiah. And so, if we must be ruled by another pawn of the Luciferian bankers and “global elite,” I suppose things could be much better under Trump than the alternative.

Oh but since Trump (allegedly) “found Jesus” on the campaign trail (the miracles never cease), Christians are rejoicing and praising God that “YHWH’s man” got in. I seem to recall similar delusions concerning G.W.B. and look where that got us: a never ending “War on Terror” which is nothing more than a self-contradicting, great idea conjured up in a Luciferian’s mind that has effectively robbed peace from the Earth forever – all based on a lie designed to perpetually line the pockets of all the neocons who are heavily invested in the Military Industrial Complex. Christians all freak out about the abortion issue (justifiably so), but what about all of our teenagers and twenty-somethings getting blown apart for nothing more than greed? Are their lives any less important than those of infants? Have we traded infanticide for the infantry? Either way, we end up with the mass murder of our children. 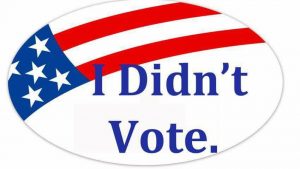 In closing my cynical little rant here, I wish to address something and I want you to really think about this: Did YHWH Himself really place Trump in office as sooooooo many on Social Media are claiming? If you truly believe that, I will be accepting your apology now for lobbing accusatory comments all over my wall because I refused to vote. Why? Because if YHWH truly placed him in office and not the totally rigged system that has placed ALLLLLLLL of our related presidents since our nation’s founding, then you have still only confirmed what I’ve been saying all all long – that either way, YOUR vote never mattered. You’ve just deceived yourself into believing in the illusion of choice when it comes to our presidents. Face it, either YHWH selects our presidents or the Luciferian bankers who prefer the bloodline of King John Lackland do. You just get the exercise of running around punching chads, marking check boxes and pushing buttons while thinking you have ever had any say in the matter. So to all of you who blasted me for refusing to vote, I’ll be reviewing all apologies and admissions of error now. Please begin posting them below at this time. Thanks.

For everyone else, please remember that this is not the kingdom we are to be serving. Trump is not the messiah, nor the Antichrist. He’s just the next puppet in a 240+ year long Muppet Show. And even if he is our Cyrus, should we really be getting excited about serving under a Assyrian/Persian/Babylonian pagan king? Should we really be excited that we ushered him in with praise? My Bible says to come out of Babylon, not endorse it. My Bible says we have a King, and His name is not Trump, Clinton, Bush or Obama.
Honestly, I hope we do have some good come from Trump’s leadership. If anyone can turn the economy around (at least from a profitable business experience perspective), I’d think it could be him. Indeed, I hope he can and does turn this country around for the better. I pray YHWH will give us more time to build HIS Kingdom and that Trump may be the one to give us the extended time and resources to do so. If he does, then maybe he could be acting the role of a Cyrus. We shall see. I think it’s way too soon to be making such assumptions though. Regardless, ultimately, my hope and trust is in no man and it certainly is not in any rigged, Luciferian system.
As for me and my house, we will serve YHWH and only endorse HIS soon coming King who will establish His (true) nation of Israel at some point in the not-too-distant future,
– Rob Skiba